Sports are more than just entertainment; they are a crucial component of our world.

Sports are humanizing, collaborative, fun; they also work out our bodies and minds.

Currently, the world’s game is on display as FIFA World Cup Qatar 2022 is being held among 32 teams, with the field increasing to 48 teams in 2026.

And this year in Qatar, FIFA is showcasing a new ball, one which pushes forward the technological possibilities and data we can glean from a soccer pitch.

That new ball – which measures movement and location to an incredible degree – is being used to help call offsides penalties but will be used for countless other things in the near future. It’s positioned as just the tip of the iceberg of technological advances in sports.

FIFA’s new ball is awesome. According to FiveThirtyEight, they developed it for five years and this is the first World Cup they’ve used it.

“Within every match ball is a device designed by KINEXON, a major player in the performance-tracking world across several sports. Per the company, this device weighs 14 grams (just under 0.5 ounces), and actually houses two separate sensors operating simultaneously:

So, not only is the ball located on the soccer pitch with one sensor, its movement – speed, rotation and more – are all measured by another sensor.

Then, for the offsides calls, FIFA is employing Hawk-Eye cameras, which you may know if you’ve seen any high-level tennis matches. It’s a computer system which uses the cameras to tell if a tennis ball is in or out of bounds. It can track the location of the ball and place it on the court with incredible accuracy.

That’s how they track the position of players; using 12 Hawk-Eye cameras located around the stadium which photograph players 50 times per second.

Put it all together, and you see how the US was called offsides against Iran on Wednesday, below.

United States goal called back due to offsides call vs. Iran​

On Tuesday, the United States Men's National Team took on Iran in Qatar. The US led 1-0 late in the first half when they put a second goal on the board just before halftime.

A few minutes later, though, the goal was called off because one of the US players was offside. 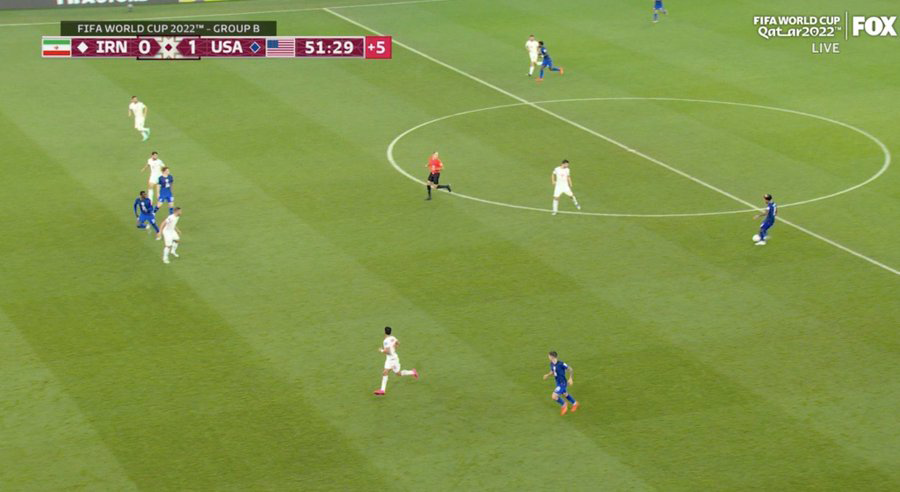 Now, from this angle, the US player looks to be onside. He’s not behind every Iran player, with one clearly closer to the goal (left) than him. However, this was a split-second before the ball left the other US player’s foot. And if you look closely, the offsides player’s knee looks just beyond the Iranian player’s back leg.

This is how it looks with the hawk-eye cameras, and how you can see he was indeed offsides. 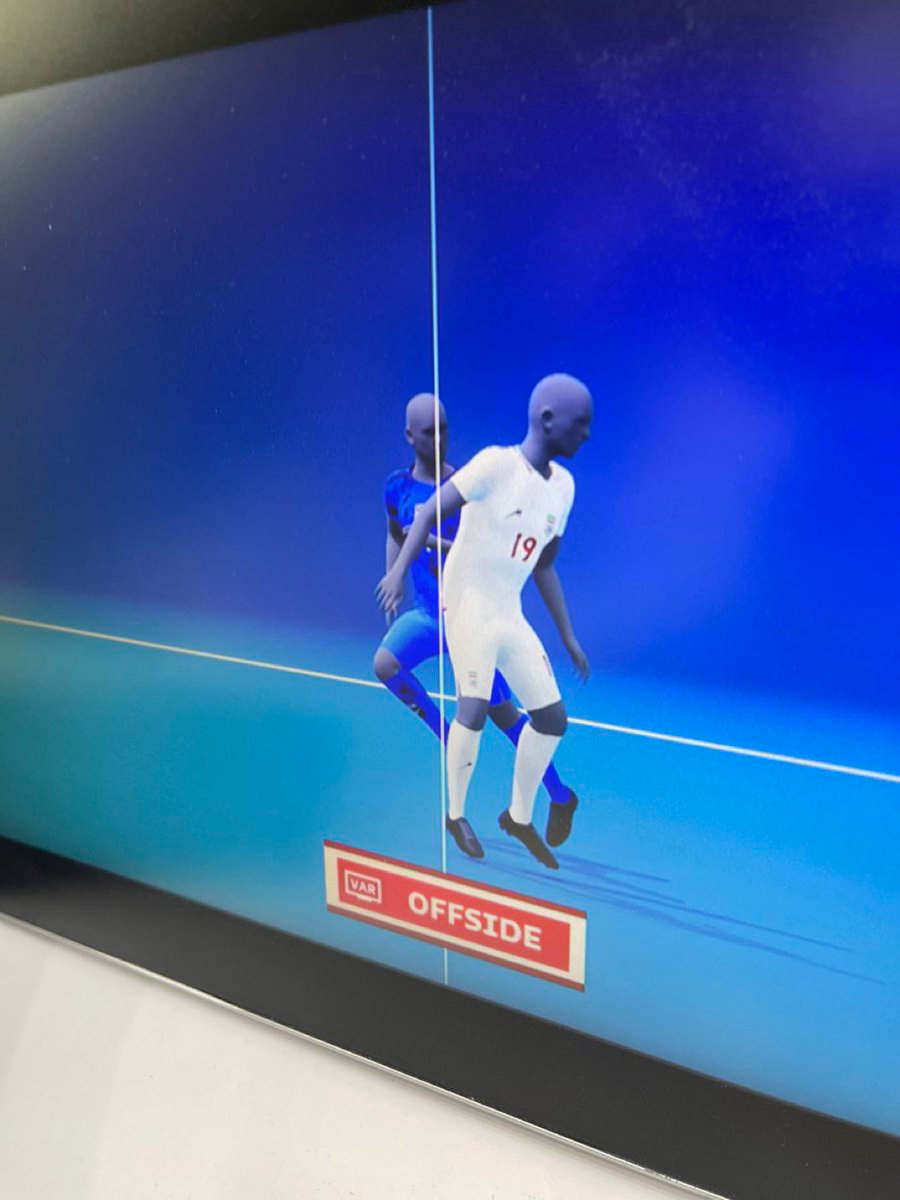 USMNT fans didn’t agree with the call at first, but this seems rather definitive.

VAR -- or Video Assistant Referee -- is a nickname for the semi-automated AI offsides technology we've been talking about above.

In the Japan - Spain game on Thursday, a ball was passed in and looked to go out of bounds, but was kicked by a Japanese player to a teammate, which kneed the ball into the net. Goal, Japan.

There's a bit of a controversey about it going on as this article is publishing.

In another instance, it looked like superstar Christiano Ronaldo headed a ball in for a goal. Instead, the data from the movement sensor shows he whiffed and didn’t touch it at all, even though players around it thought he did.

That was all explained here on Sky Sports.

And shown in their pictures here: 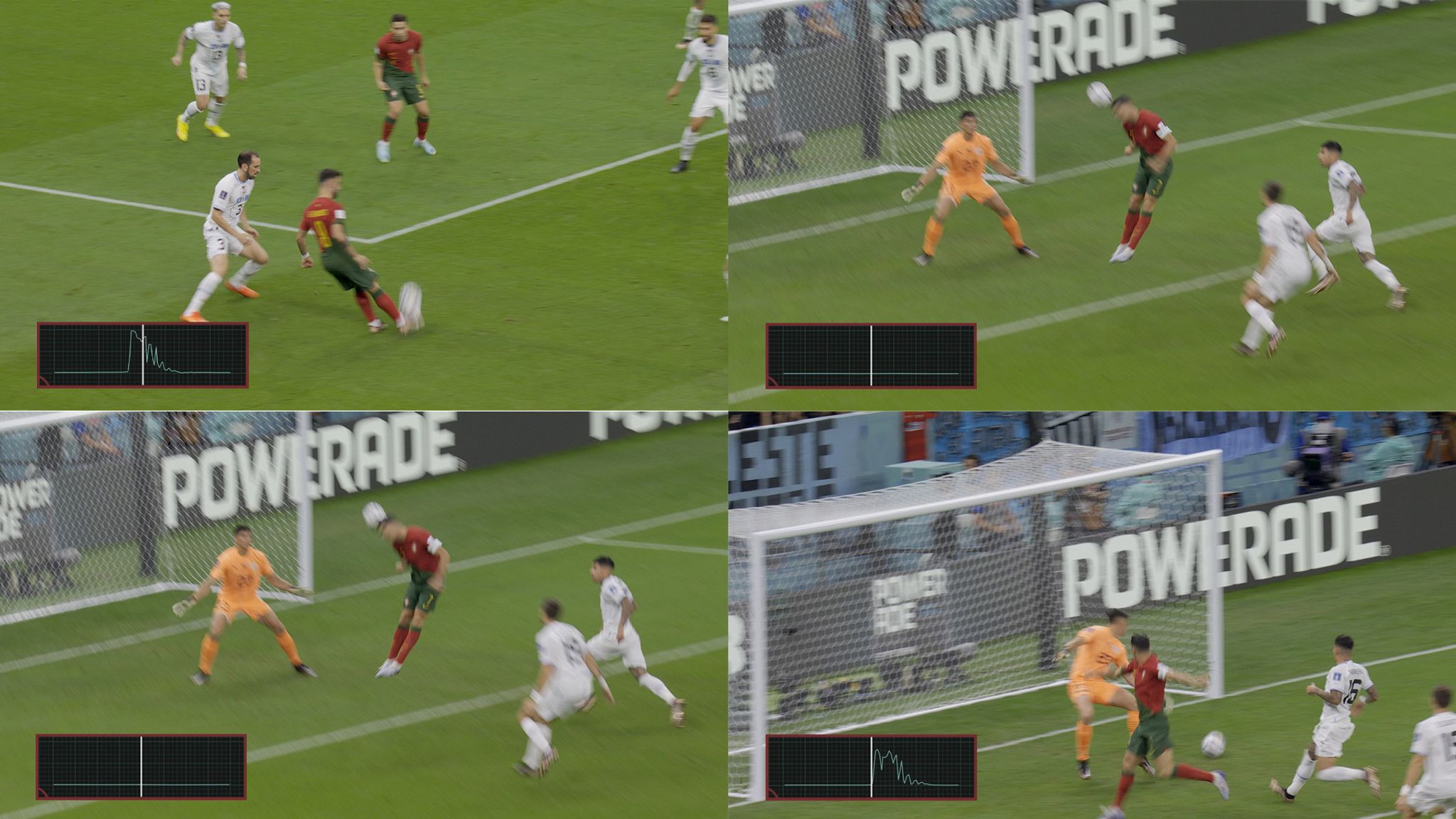 The little black box at the bottom left of the frames shows movement of the ball. Notice the flat line as the ball comes near and then away from Ronaldo.

That means scoring will be more accurate, too.

Sports getting more high-tech all the time​

We’ve talked about biometrics and how the National Football League uses them with their athletes in previous blogs.

Simply, each player is hooked up to a WHOOP sensor, which measures all kinds of things like heart rate, but also speed, acceleration and location on the field. That allows NFL Next Gen Stats to create amazing charts and animations, showcasing how a player performed on a particular play.

Speaking of the NFL, they could borrow and use this same technology FIFA is using to monitor the exact position of their footballs on their fields. That would be hugely important for determining field positions for first downs and the all-important scoring plays with the goal line.

In the MLB, bat speed, launch angle and distance of homeruns are calculated on the spot, and they have cameras to help compute if pitches are balls and strikes.

But it’s not just at the professional level, sports and technology will continue to collide for years to come. And anyone can track their data in this day and age.

If you’re using an open-source wearable, simply use it while working out and then push the data into the cloud with the help of Fathym.

Fathym built IoT Ensemble to empower a wide range of small, medium and large businesses as well as makers/DIYers.

That includes enterprises who need IoT software to collect data for, say, their refrigerated trucks. Or a wearable biometric sensor company who needs to get data into the cloud with ease.

That usability extends to small and independent brewers, home brewers, and others like DIYers to set up monitoring for their equipment - but this time without needing a few senior engineers to be Microsoft Azure experts.

FIFA is using this new, spectacular soccer ball and has shown off how it works both in the US-Iran game as well as Portugal-Uruguay with Ronaldo’s phantom header.

In the future, soccer teams will use the data from the soccer balls to strategize against one another. And fans will be able to use the data in all kinds of fun ways, too.

Similarly, we’re seeing technology in sports all across the world.

See that awesome technology this Saturday, Dec. 3 as the United States faces the Netherlands at 10 a.m. ET.