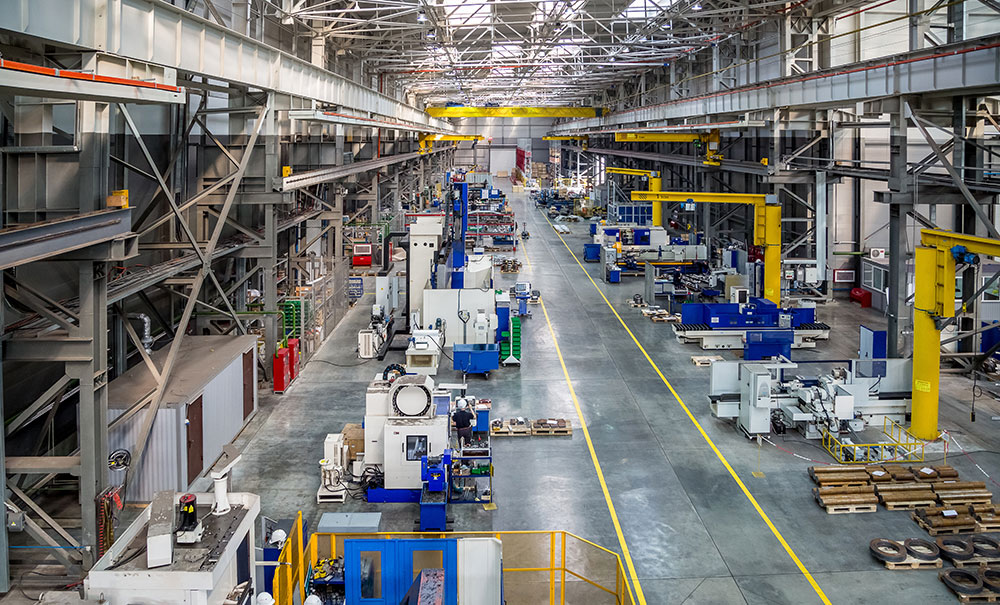 Whether you’re looking to buy a car, a new TV or a refrigerator, you’ve likely felt the pains of the global supply chain issues.

In fact, global supply chains are becoming more fragile, and the ongoing COVID-19 pandemic has only exacerbated things.

Therefore, the simple answer is to bring manufacturing back to America. Doing so will create jobs in the United States, lessen turnaround times for customers and their products, it should lower the cost of goods. Plus, it will have a positive impact on the climate.

But on the “creating jobs” part: When it comes to manufacturing, all signs are pointing to an American manufacturing resurgence, which is a good thing. However, those jobs will be done in large part with robotics, leaving some workers searching for new opportunities.

According to the New York Times in January of this year, onshoring – or the bringing back of manufacturing to America – is already happening. The news publication reported on General Motors’ $4 billion expansion to their electric vehicle battery production, and Toyota’s $1.3 billion battery plant planned for North Carolina. They continue, explaining Samsung’s plans for a $17 billion semiconductor factory to be built in Texas, and maybe more importantly, Micron Technology will invest $150 billion into memory chip manufacturing, part of which will be spent in the US.

Of course, global supply chain issues hit a lot of people hard when it came to a shortage of chips. Chip shortages had an incredible impact on the auto industry, where new, state-of-the-art cars can have upwards of 100 chips and many semiconductors to run their safety equipment. The increased demand for new cars in 2021, coupled with chip shortages, meant an expected $210 billion in losses for the auto industry per Jabil.

Unfortunately, the chip shortage is expected to continue into 2024. But, in more positive onshoring news, Intel is creating multiple chip-producing factories in the US, in Arizona and Ohio per Power & Beyond.

“Intel is one of many chipmaking giants ramping up investments in infrastructure, by building new fabs in Arizona, Ohio, and Germany. However, current timelines estimate that these will not come online until well into 2024 — when the shortage will, hopefully, be over for the most part.”

But even if there is an onshoring phenomenon happening, does that mean the American workforce will grow? Not necessarily. 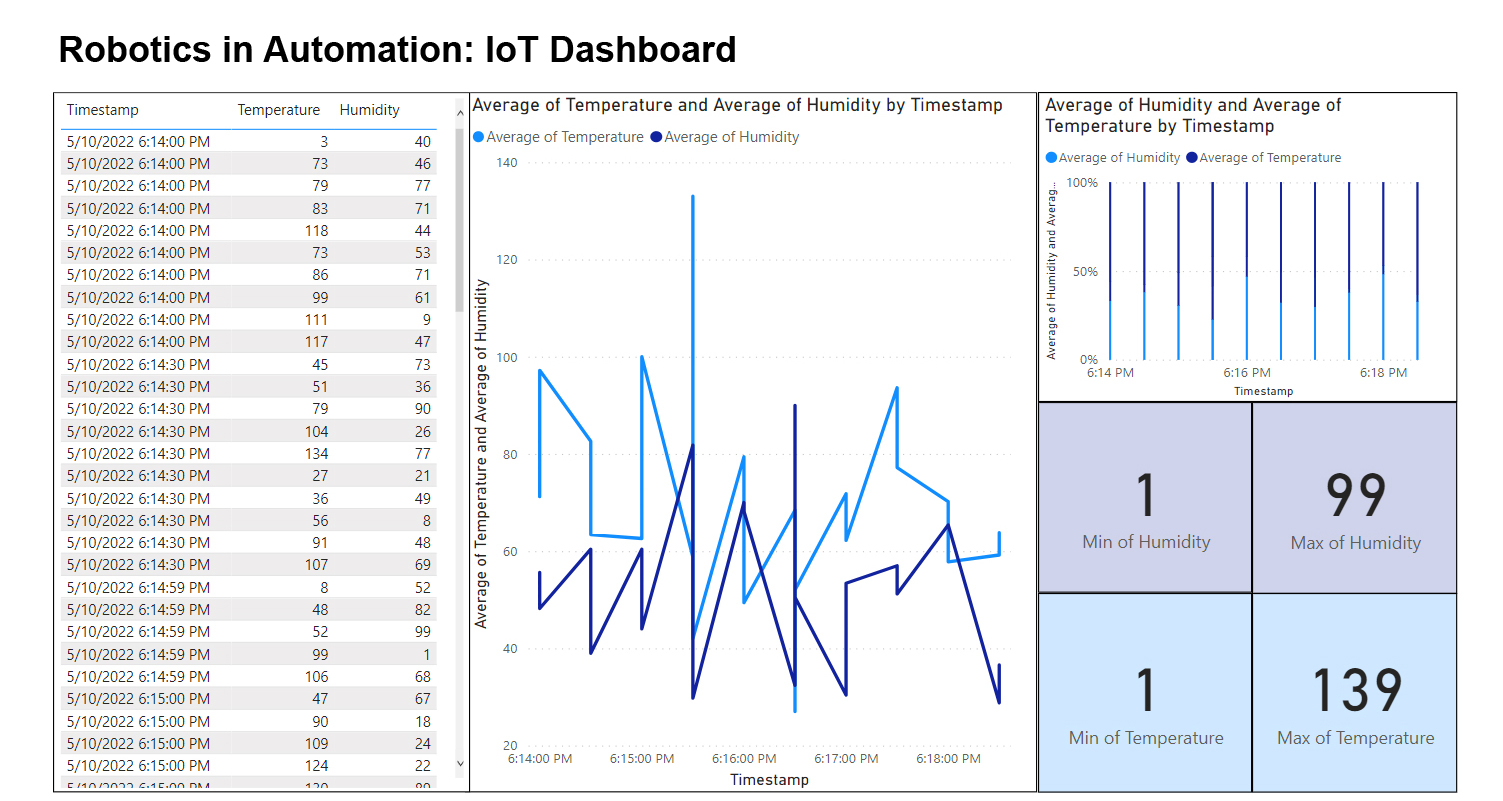 That aforementioned New York Times piece explained that there were 17 million manufacturing jobs in the US in the mid-90s, which dropped to 11.5 million in 2010 and has grown slightly since then to 12.5 million.

It’s a bit of a messy picture when looking at manufacturing jobs.

“Manufacturing jobs have seen eight consecutive months of growth, with December seeing more jobs added than lost, according to the U.S. Bureau of Labor Statistics. That’s worth noting since we’re in the middle of a pandemic and economic uncertainty is the norm.”

But(!) “Meanwhile, software has eliminated most of the higher-paying jobs that people could get without a college degree. More specifically, self-driving car technology coming to market could eliminate the largest remaining swath of these jobs.”

Automation is not a new concept, coined as a term way back in 1946 in the automotive industry, but automation is on the rise thanks to better and more reliable robots.

“The rise in automation available to U.S. manufacturers is going to provide a huge benefit. Why? Because robots can now build things cheaper than workers. They require a large upfront capital investment, but this cost is relatively the same everywhere in the world. This eliminates the strategic advantage of cheap labor held by international competitors. I predict that industries that have been dependent on cheap labor as a strategic advantage will see their businesses disrupted by robotic automation over the next 10 years, paving the way for a resurgence in U.S. manufacturing.”

The benefits of automation only continue outside of building things cheaper than humans. Automation lowers operating costs and improves workplace safety because humans aren’t needed to perform dangerous tasks.

Of course, there’s also more productivity – See: No work breaks, no lunch breaks or any other need to stop. On top of all that, the end product is better and more consistent when robots are making it.

And Robotics and Automation News reports the automation industry is projected to nearly double – from $169 billion in 2019, to $297 billion in 2026 – over the course of seven years.

These robots aren’t just popping up in the warehouses of giant manufacturers, either.

Jack in the Box is experimenting with robots making fast food. Specifically, they’re being asked to work the friers, one of the most dangerous, dirty and degrading jobs in a restaurant.

Automation in many sectors​

It only continues from there as robotics and automation are reaching into many different spheres. That includes automobile manufacturing, the food industry, electronics manufacturing, agriculture and the medical community.

Robots are increasingly being used for tasks like: Welding, painting, buffing, palletizing, polishing, grinding and other dangerous tasks to humans. And robots can do all of these tasks more efficiently and effectively than can their human counterparts.

In the electronics sector, “cobots” -- or collaborative robots – are used by employees as they create flatscreen TVs, smartphones and more.

When talking about food manufacturing – like Fathym’s work with Crazy Mountain Brewing, for instance – sensors and cameras are utilized to help detect defects in their processes. That helps ensure the quality of products is top-notch.

As more businesses onshore and/or grow their manufacturing efforts, and as smart sensors become more ubiquitous, there will be a ramping up of data.

It will be a deluge of data!

In fact, some companies who we are working closely with have already become overwhelmed by the amount of data they’re bringing in.

Simply, more data means an increased need for being able to sift through that data efficiently.

According to an Inmarsat report, 86% of businesses aren’t using their IoT data effectively. More specifically, 46% of respondents said there was a delay between data collection and delivery, while another 33% cited a lack of IoT strategy completely.

At Fathym, we present IoT Ensemble.

All your IoT data can now be accessed in one place. Or, if you’re a massive manufacturer, that data can be accessed in multiple places, with multiple dashboards and applications constructed for multiple clients. 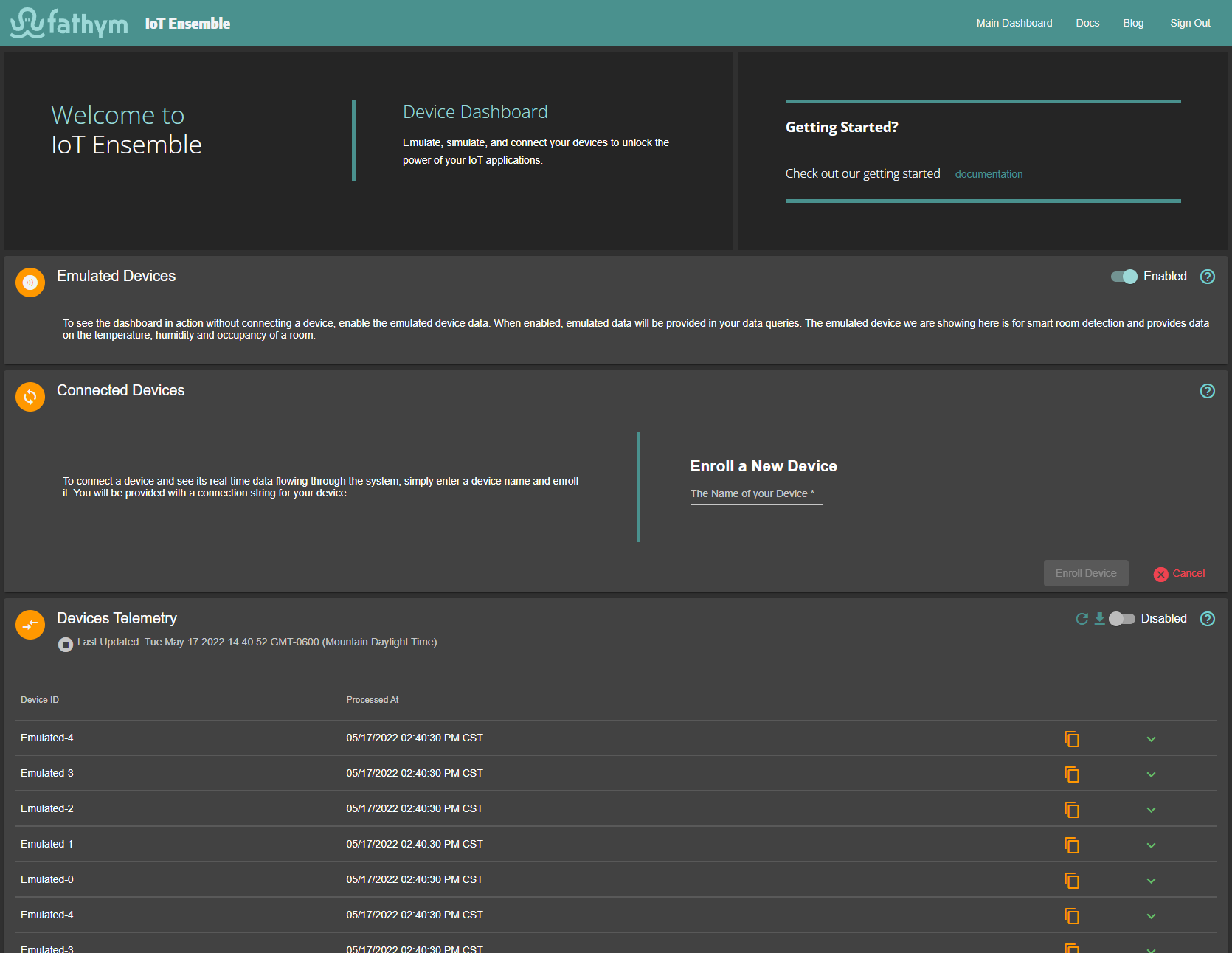 Dashboards and applications which display your IoT data can be flashed up in mere minutes instead of days and weeks. This is incredible, data-on-demand power. Plus, it’s all displayed in real-time.

Fathym is your virtual development team that automates best practices for delivery and scale of IoT applications in the cloud. Process, store and access your data in minutes.

Reporting tools, like Power BI, help you visualize collected data in readable, understandable and intuitive graphs which can be customized to your preferences.

Those graphs are also interactive, allowing the viewer to easily decipher how certain data points relate to others.

IoT is all about data and information. Those in the automation game will need to know a lot about their new robot employees. Temperature, oil life, wear and tear on parts and more can be kept in check by using the right IoT solution. That data can also help the human managers find efficiency issues and make the most out of the opportunity.

Watch how to setup your own IoT Ensemble account and get running today here.S

We encourage you to join Fathym today for free and dive into the world of IoT Ensemble.